The Wellies 2015 - Capital Comedy and Julz are WINNERS

Last night Wellington Comedy Awards The Wellies 2015 were held. It was a fabulous evening of decadence and excitement for another year of comedy holding it's own against the other entertainment forms in Wellington.

​This year was exciting as we stood in Wellington's dedicated Comedy Club VK's Comedy Bar to celebrate this Awards.

​Sanjay and I (Julz) were in attendance but weren't expecting a win. We were happy to have been nominated for two categories and thanked everyone for thinking of us when they voted.

​Then came the awards ceremony. There were tons of people to recognise and thank for their efforts to keep the comedy going in Wellington. Spirits were high as the award presenters performed fun acts before announcing the winners.

​As you can imagine Sanjay and I were pretty damn stoked with the wins! Thanks to everyone for voting for us. It's so great to feel appreciated for all the hard work that we do behind the scenes. Here's to another great year!

My show has been accepted for Comedy Festival 2018!

A fortnight out from What Do I Do With This Dress

Bendy bitches of Bogan Yoga are BACK! 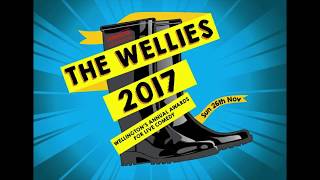